October 21, 2017
Our lives are always a little hectic, to the point we usually don't know what we're going to be doing a week in advance. So, our decision to purchase wristbands to the Harry Potter Festival in Jefferson, WI a couple months ago and circling today's date on our calendar is a big deal, especially since we have other things going on this weekend too (including my daughter's skating competition tomorrow).

That's why I'm sad to say we were all seriously disappointed by this event.

I don't consider myself a die-hard Harry Potter fan. I've seen most of the movies and liked them. But, it was never anything that I would consider an obsession. And, knowing Jefferson is a small community and this is their first year hosting an event like this, I did lower my expectations a little bit before going to the festival. However, even with my expectations tempered, I honestly didn't expect it to be as bad as it was. This "festival" looked a heck of a lot like an event that was thrown together at the last minute rather than something that was supposedly been in the works for more than a year.

Let me be clear from the start, not everything was bad. This guy, for example, was pretty cool: 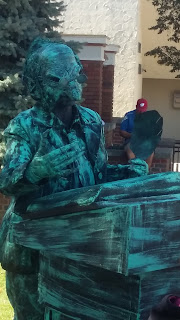 And, there were a couple other interesting decorations scattered throughout. 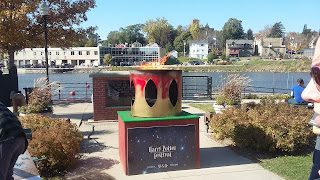 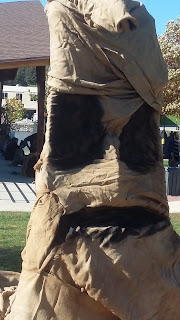 The problem was, even though there were some good things about this event, there were just as many more that weren't overly impressive.

Let's put it this way, an event like this really only works if it allows you to slip into the movies/books and be able to pretend you're in Harry Potter's world. That was very hard to do at this event because the majority of the town didn't even bother to acknowledge the event. Most of the businesses didn't even bother to decorate.

The strange part about this is Jefferson has the perfect venue for something like this. The Jefferson County Fair Park has enough space to host all but a couple events. Yet, the only thing the organizers used that park for was parking and camping.

I think this event had a lot of logistical issues as well. As I overheard from another attendee, Jefferson didn't seem prepared for the large number of people the event attracted. I came to this event fully expecting lines at the advertised attractions and was not surprised by those. I was, however, surprised at how slow those lines were moving. In fact, there were a few that looked as though they had not moved in a while.

And, this wasn't just the attractions. Everything had a long line like that. This included the shuttle buses (there were too few of those) and we quickly realized it was quicker to walk everywhere than it would have been to wait for a seat on one of those.

What really was disappointing was the fact those same attractions weren't really worth the wait. We didn't make it to every one of them but were unimpressed with the ones we did see.

The "prison," for example, was a tennis court and visitors had to pretend the green part of the court was the cell. Well, actually, that's based mostly on an assumption. When we visited, the only thing in the fence were a couple cheap-looking Halloween decorations that were hanging up near the entrance and exit. I'm not sure if there were supposed to be people inside the tennis courts or not.

The near-by Wizard's chess was also a big let-down. When I hear there is a live game of chess, I envision something similar to what I remember seeing in Mel Brooks' History of the World, Part One.

This live chess game took place on a way-too-small mat in the middle of a basketball court. Apparently, they didn't notice the big, grassy field a short distance away from that.

There were plenty of vendors at this event, which was one thing we (mostly my daughters) were looking forward to. Unfortunately, even that didn't work out too well. While, on the surface, I do like the fact Jefferson at least made an effort to create a bit of realism by having the majority of vendors working out of alleys with menacing-sounding names, the logistics (again) didn't work as well as I think they thought. Those alleys were crowded and cramped to the point you could barely walk through and couldn't see most of the displays. In fact, the only thing I remember seeing in Dragon's Alley was an easy-to-knock-over shelf holding a bunch of breakable coffee cups.

Also, while some of the vendors at least made an effort by dressing in costume and selling their wares out of wand shops, potion shops, etc., there were quite a few that didn't do this. This, again, is all about atmosphere. I can believe Harry Potter would have a wand store around every corner. I find it hard to believe the would have someone trying to sell windows right next to it.

Had this been a free event, I probably would be debating whether or not it was worth the gas I used driving to Jefferson. The fact I had to buy wristbands in advance of this event makes my disappointment sting even worse. This event simply was not worth the money and, if they end up having it again next year, I have no plans to attend.