Review of the Crasche Headband 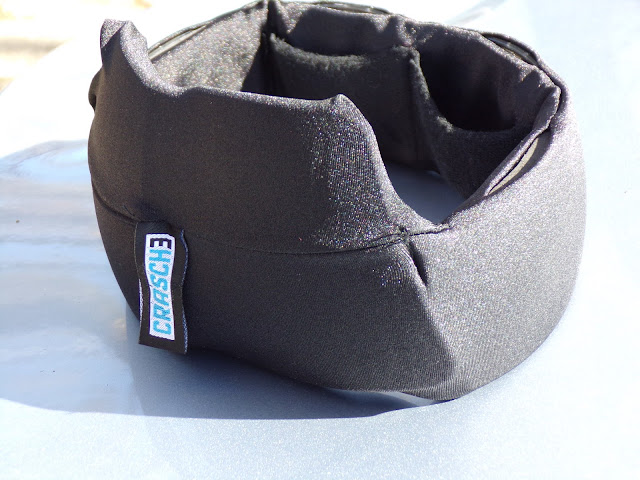 A couple weeks ago, my oldest daughter was practicing a figure skating move, caught a divot in the ice and fell backwards. She ended up smacking her head on the ice as a result of this.

Fortunately, other than a bruise on her tailbone and scraped elbows (both of which hit first), she walked away from the fall relatively unscathed and showed no signs of suffering a serious head injury. However, this was the second time this has happened to her (the last time was a little less than a year ago). As a result, I let it be my wake-up call and went searching for something to give her some more protection.

I had heard other skating parents talk about the Crasche headbands they had purchased for their daughters and, after checking them out on their web site, decided to order one for her that night. She's been wearing it for a little over a week now and, so far, I'm happy with my purchase.

While the headband isn't designed to replace a helmet (they even have a disclaimer saying this), I do feel much more comfortable with her being on the ice when she's wearing it. The best way to describe it is, the headband is constructed much in the same way you would expect a knee or elbow pad to be constructed. Only, it circles the skater's head with that padding. If nothing else, it's definitely better than her wearing just a stocking cap or nothing at all on her head.

One of my biggest concerns when I purchased this product was how heavy it would be. One of the main reasons why she doesn't wear a helmet when she practices is the weight from it throws off her balance and she falls much more as a result. And, while that might protect her head better, it does open her up to other potential injuries.

Unlike a helmet, this band doesn't have much weight to it and, more importantly, fits snug against her head. As a result of that, it doesn't affect her balance and, most of the time, she forgets she's even wearing it. This allows her to run through her competition programs and practice new moves the same as she would if she were wearing a regular headband or stocking cap.

In fact, if she wanted, she could even wear her stocking cap over top of it so her ears stay warm. That's definitely not something she could do with a helmet.

I'm still going to worry about her when she's on the ice (that's what parents do). But, purchasing this product does give me a little more peace of mind and I'm glad I was able to buy something for her that gives her a little extra protection and fits comfortably enough for her not to have a problem wearing it every time she's on the ice.