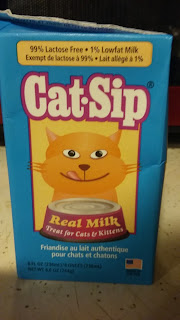 I saw this product on the shelf while picking up some cat food for my cats yesterday evening. I thought it was a bit pricey ($1.59 for a small container, I can buy a gallon of milk at the gas station for 40 cents more). However, I was intrigued by it because my oldest cat, Echo, loves milk but gets sick off of it and doesn't care for soy milk (I don't blame him, I don't like soy milk either). So, I ended up deciding to try this.

I wasn't really sure what to expect from this product when I purchased it. I've actually tried similar products in the past and he wouldn't touch them. As a result of that, I wasn't sure if I wasted my money on this or not. But, as it turns out, it was actually well-received.

When I first poured some of this product in his dish, Echo didn't know what to think of it and I thought he would just end up ignoring it. However, his younger brother, Mouse, ended up drinking some of it first and, once he started, Echo tried it too and both seemed to love it. I ended up giving them seconds of it a short time later and that bowl was emptied too.

And, unlike real milk, this seems to sit well with both cats. Neither of them got sick from it and were wanting more when I got up this morning. Because of this, I think it is a product I'll purchase for them again, though I will still look to see if I can buy it for a little lower price somewhere else.