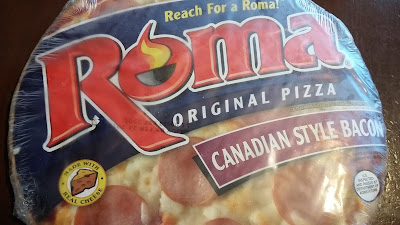 One of our local grocery stores had a coupon for Roma frozen pizzas this week (7 for $10) and, knowing there will be days when frozen pizza is the best option for dinner, I decided to take advantage of it.

The pizzas filled up our freezer a little too much, however, and, since we needed the space, I decided to make pizza for dinner last night. Mostly because it was the one variety that didn't require me to dig to the bottom of the freezer, I picked out the Canadian Style Bacon pizza.

This was my first time having this variety and I wasn't really sure what to expect from it. But, it turned out to be pretty good.

Much like other pizzas from this brand, the Canadian Style Bacon variety had a thin crust (a little too thin for me) and was a bit on the small side. This, however, is something that doesn't bother me too much when it's a bargain brand like this one.

I was, however, somewhat impressed with the quantity of bacon on the pizza. This wasn't the case when I first opened it up (I thought it looked a little on the light side). But, when I sliced the pizza, I realized there was at least one piece of bacon on each slice. Again, since this was a bargain brand that ended up costing me less than $2 per pizza, that was more than acceptable. 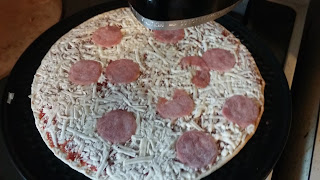 I also thought the bacon had a good flavor to it. One of my biggest concerns when purchasing this variety was the bacon would end up being too salty. But, that was not the case. It had a good blend of seasonings and the bacon worked really well with the pizza sauce. I won't go as far as to say it was the best frozen pizza I've ever had. But, even with the thin crust, it was pretty good.

As a result of this, I thought this was a good purchase. It's a brand/variety I would recommend if you're looking for a cheap frozen pizza for dinner.