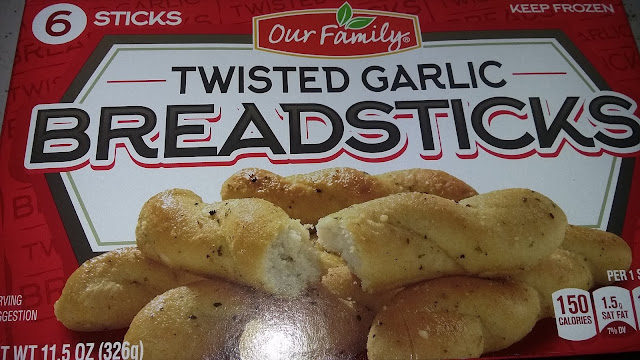 Mostly because of the unusual heat (we were in the 90s) on Saturday, my family and I ended up having a bit of a lazy day and, other than doing up the dishes and a couple other small chores, spent most of the day getting caught up on the television shows we had on DVR.

When dinnertime came around, I decided to keep things simple and made some spaghetti. And, since I already had a box in the freezer, decided to throw some Our Family Twisted Garlic Bread Sticks in the toaster oven too.

I purchased this product a couple weeks ago with the intention of having them with something else we made for dinner (I wound up forgetting I had purchased them). I made the purchase primarily because the bread sticks were on sale and I was looking for an affordable side dish to go with dinner (I think we had pizza that night).  After having them on Saturday, I did think it was a good purchase.

Prior to buying this product, I purchased a similar product from a bargain brand. I was very unimpressed with that purchase and, even though I liked the lower price, I had some concerns that would be the case with this product as well. However, as it turns out, I didn't have many complaints about this purchase at all.

One of my biggest complaints about most bargain brands (including the one I mentioned) is they tend to go overboard with the butter. I like butter as much as the next person. But, I do like being able to pick up my bread stick and not feel as though I have a thick layer of grease coating my fingers. That was not a problem with this brand. There was just enough butter to hold the seasonings in place without being too much.

I also thought these had a decent taste to them. They didn't have too much garlic and were seasoned so they complemented the spaghetti well.

In fact, my only real complaint about this product is the bread sticks seemed to be a little doughy when we were eating them and I had to check to make sure they were fully cooked as a result. This, however, wasn't a huge deal given the lower price and I still felt as though I got good value for my money.