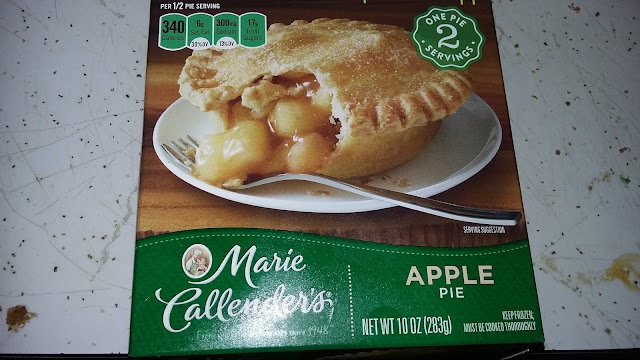 My wife had a rough day at work yesterday so I told her I would take care of dinner. Since I wasn't really in the mood to make anything overly complicated either, I decided to just pick up some pot pies from one of our local grocery stores.

While in the freezer section, I spotted this product on the shelf above the pot pies. After some consideration, I decided to pick up a couple of them (one for me and one for my wife since the girls already had cupcakes) and give them a try.

I have had a similar product from a different brand before and wasn't overly impressed with it. As a result, while I was willing to give this product a fair chance, I did have some doubts about it too. As it turns out it, it was actually really good.

When I made my pie, I used the instructions for making it in the microwave. I did this because it was much faster than preheating the oven. But, at the same time, I couldn't help but wonder how it would turn out. After making it, however, I was very impressed.

One of the things that surprised me the most about this product was the way the pie crust turned out. It was crispy without being overcooked. This honestly was not something I was expecting because of how I made it but, apparently, Marie Callender's knew what they were doing (this includes putting a special silver surface on the inside of the box to help when microwaving the pie).

Based on my previous experience with the other brand, I wasn't expecting the pie to have too much filling. So, I was pleasantly surprised when it was full of piping-hot sliced apples. That made it worth the $2.75 I paid for the pie.

I was also very impressed with the flavor. A lot of frozen pies like these are a little too sweet (usually from added sugar). This pie had just the right amount of sweetness to it and was more than satisfactory as a result.

Because of this, I have to say I enjoyed my experience with this product. If you are looking for an affordable dessert, it's one I would recommend purchasing.