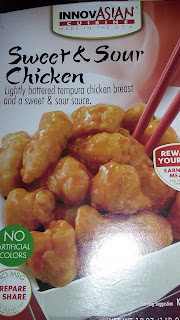 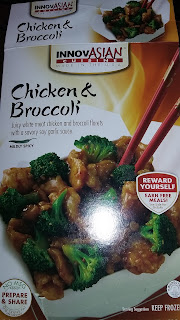 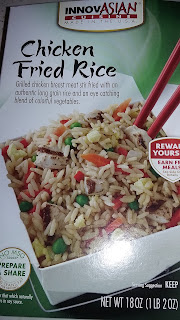 I have originally planned on using some gift cards to take my family out for dinner yesterday evening. But, after some consideration, decided to wait until Saturday to do that instead. And, mostly because I wasn't in the mood for frozen pizza again, I decided to stop at the store and look for something different for dinner.

I have seen the InnovAsian entrees before but, mostly because of price, had avoided purchasing them (frozen Chinese food entrees shouldn't cost more than eating at a Chinese buffet, at least in my opinion). However, the grocery store I was at happened to have them on sale for $4.99 each and, because of that, I decided to give them a try.

After looking over all my options, I ended up settling on three of their varieties, chicken & broccoli, chicken fried rice and sweet & sour chicken, with the intention of setting up a mini buffet. After having the products, my opinion of them is a little mixed.

Taste wise, I didn't have too many complaints. These were obviously frozen entrees rather than fresh (the chicken was a little rubbery as a result). But, they had a good flavor to them that made them more than edible. Of the three, I think the chicken fried rice was my favorite, followed by the chicken & broccoli (even though that one was a little spicy).

When it came to convenience, the different varieties varied a bit. All could be made in the microwave which, while not the recommended way of making them, was a necessity because we were already eating later than we wanted to and our oven takes forever to preheat. The chicken fried rice was the easiest to make because all I had to do was poke a couple holes in the bag and cook it. The other two required a couple extra steps (thawing the sauce and adding it later) but weren't too hard to make.

I was, however, disappointed the various items didn't come with their own microwave/oven safe dish and I had to use my own. An item just isn't as convenient if it means I need to wash extra dishes in order to make it.

I also wasn't overly impressed with the quantity. I wasn't expecting each box to be its own meal (which is why I bought more than one). But, once the food was cooked, it was about half of what I was expecting to see, especially for the price. Even on sale, it was a little hard to justify buying this when I could have gone out to an all-you-can-eat buffet for $8 per person.

As a result of this, even though I thought the food had a decent flavor, I would have a hard time convincing myself to make this purchase again, especially if the frozen entrees were at full price.