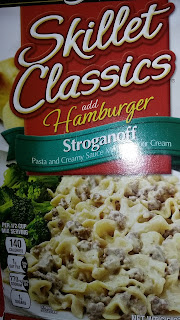 My youngest daughter had dance class yesterday evening and her older sister had skating practice. As a result of this, none of us were going to be home. And, because my wife and I both forgot to throw something in the slow cooker, we ended up looking for something that would be quick and easy to make for dinner.

Since she had to run to the store anyway, she ended up stopping in the boxed food aisles and picked up a box of Stroganoff-flavored Skillet Classics from the Food Club brand and prepared it (using hamburger we already had in our freezer). After having it last night while rushing to get out the door, my opinion of it is a little mixed.

At least as far as convenience went, I thought this was a good choice. She started this after getting back from the grocery store and, by the time I got home (about 15 minutes later), it was almost done. It was easy for her to make while starting to get the kids ready to leave and still ended up being a filling dinner.

One thing that surprised me was how much the finished product looked like the picture on the box (sorry, I didn't have time to get a photo of that). That's unusual for most boxed items like this, especially ones that are from a bargain brand.

Unfortunately, when it came to the taste, I was a little disappointed. This is probably just a personal preference (my wife did not have the same complaint), but I thought the finished product was very salty. I was able to still eat it, but it wasn't as enjoyable as I would have hoped it would be because of that.

As a result, while I would recommend this product if you are looking for something you can make easily, I would not recommend it if you don't like a lot of salt on your food because it might not be worth the money as a result.