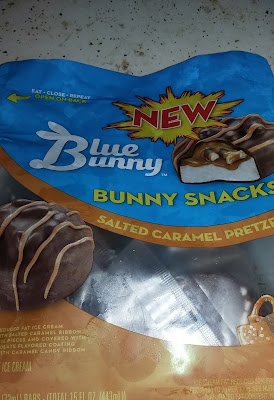 I had to stop at the store last night for some more cat food and, since my wife and I had already decided on leftover pinto bean soup for dinner, I ended up stopping by the freezer section in search of something for dessert.

When I first saw this product, I gave serious consideration to leaving it in the freezer. This is because, while it looked good, I thought the $4.99 price was a little high, especially since it didn't look like it offered too much in quantity. However, after failing to decide on something else, I decided to pick up a bag of the salted caramel pretzel variety as well as the chocolate chip variety.

We ended up having these, as planned, after dinner last night. And, after trying them, I'm not convinced buying them was the right decision.

I'll start out by saying these weren't bad. In fact, I had one of the salted caramel ones and thought it had a good taste to it. It's just there really wasn't anything special about them either. As my wife described it, it tasted a lot like we would expect if we were eating a Klondike Bar.

I should also mention these were surprisingly messy. Even though I think they are supposed to be a finger food, every single one of us had to put our Bunny Snack in a bowl because they started falling apart as soon as we bit into them. I ultimately just ate mine with a spoon (I think my youngest daughter ended up doing the same).

Also, as it turns out, the quantity did leave a lot to be desired. The bunny snacks are pretty small. And, there's only 6 of them in a bag. Again, this product was $4.99 per bag. For that price (and often less) I could have bought a half-gallon of ice cream or a box of much-larger ice cream treats. Even though, as I said, these were OK taste-wise, I just didn't feel as though I got my money's worth with them.