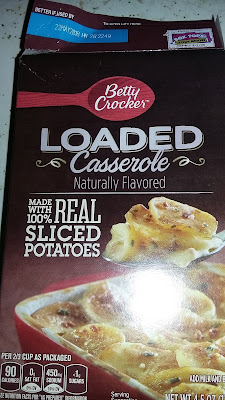 It was skate/dance night again last night and, since none of us would be home until after 7:30, I decided to through some pork chops and green beans in our slow cooker before going to work. I had planned on adding some fresh potatoes as well. However, when I opened up the bag we had in our pantry and discovered they were rotting, I ended up making this product instead.

I purchased the Betty Crocker Loaded Casserole variety about a week ago because I happened to see it on sale (about $2.50) and figured it would be an OK choice for circumstances like I described above. And, overall, I think it was a good purchase.

I'm actually not a huge fan of boxed potatoes like this and, to be honest, there wasn't anything about this particular product that made me change my mind. In other words, when eating this, I didn't notice anything that would make me believe I could be tricked into thinking they were freshly made. But, given the circumstances, I thought they were a decent complement to dinner.

I thought the potatoes were easy to make. All I had to do was combine the contents inside the box with some water and milk and microwave them for 15 minutes. While I did think the cook time was a little longer than I would prefer (I could have picked up a bag of potatoes on my way home from the ice rink and cooked them almost as fast), I did appreciate the fact there weren't a bunch of complicated instructions to follow.

Taste-wise, I thought the potatoes were a little dry (typical of boxed products) but did like the cheese sauce on them. It was a bit sharper than I was expecting but had a good taste to it that almost made up for the flaws that typically come with pre-processed products like this. In other words, while I wouldn't want this every day, I would consider purchasing it again if I needed something in a pinch.