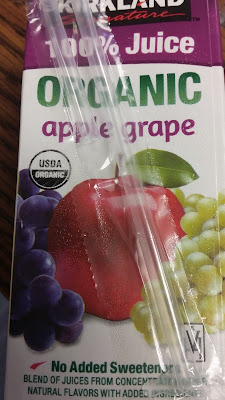 I am a soda addict and, even though I have pretty much given up being able to kick the habit completely, I've been making an effort to at least cut back on how much I drink. And, as part of this, I have been trying to take healthier alternatives with me to work. This included a drink box of Kirkland Signature Organic Apple Grape Juice.

I purchased this product during a recent Costco trip because (bought in bulk), I thought it was a good deal and would be something my daughters could take with them to drink during skating or dance lessons. After trying it this morning, I probably will end up needing to buy more of them.

One of my biggest concerns when trying this juice this morning was the flavor. Since it was still early, I wasn't in the mood for anything that was too sweet or too tart and I have had other discount juices that fit into that description.

This juice, however, was what I was hoping it would be. There was enough sweetness in it to give me some of the sugar fix I was missing from not having a can of Mountain Dew first thing in the morning. But, it wasn't sweet to the point I couldn't drink it.

In fact, it was actually much more refreshing than I was expecting and it was at least part of the reason why I was able to make it until almost 1:30 p.m. before I finally caved in and had my first soda for the day. As a result, it is a product I would definitely recommend.