I Dunked Our Priest and Helped the Homeless

August 12, 2017
It was a pretty busy day today. My dad had his 70th birthday party (a little over a month late) and we were at his house most of the day as a result talking to friends and relatives. However, we were able to duck out of the party for about 30 minutes to help out a good cause too.

There was a small fundraiser at Swan Park today meant to help out the local homeless shelter. So, we took some cans of food with us and (after having to run back to my house for some cash) the four of us each took a turn at the dunk tank, where our church's priest volunteered to sit on the dunk chair.

Overall, we did pretty well getting him wet too. My oldest daughter, Azalea, knocked him into the water twice, something that really surprised me considering she's normally not that accurate throwing a ball. Her younger sister, Summer, wasn't as successful. She hit the target but her hands were too small to get a good grip on the ball and there wasn't enough power behind it. However, another participant decided to pay the $10 to just push the button and was kind enough to let her be the one to do it.

My wife missed on her three throws but, after being a little high on my first throw, I hit the target (and dunked him) twice in a row too. And, as an added bonus, Azalea (who brought her camera) was able to get a photo of my last throw just as it was hitting the target. I have that photo posted below: 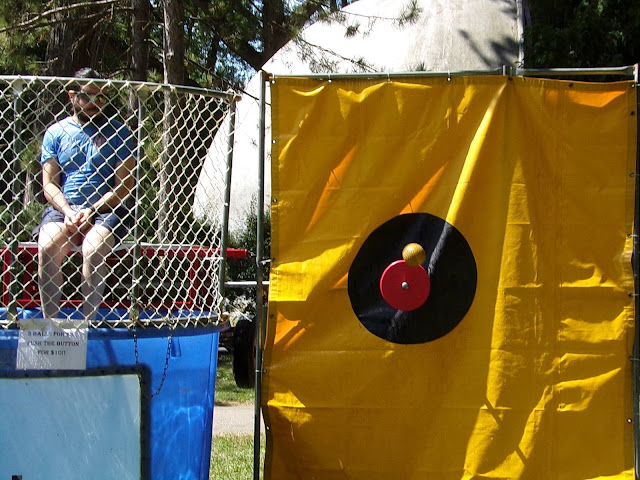