Dude, She Got a Tattoo

August 20, 2017
When we attended the county fair this week, the last thing my wife and I were expecting to do was let her get a tattoo.

In fact, when we saw there was someone there offering that service (real ones, not the temporary ones) we actually ended up joking about it more than considering it.

However, we did our research on the person who was offering them, found out he was legitimate (licensed and everything) and even talked to some of his customers who were local. Then, after learning he could do the rose and violet tattoo my wife has wanted for years (for our daughters' middle names) for about half of what other tattoo artists have wanted, we decided to pull the trigger. After all, it seemed like a better deal than spending money on games that offered crappy prizes and food that wasn't nearly as good as it was at past fairs.

He did good work too. It's exactly what she wanted and he was done in about an hour, giving us time to still see the concert. 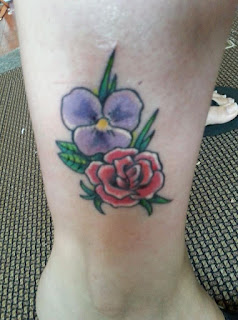