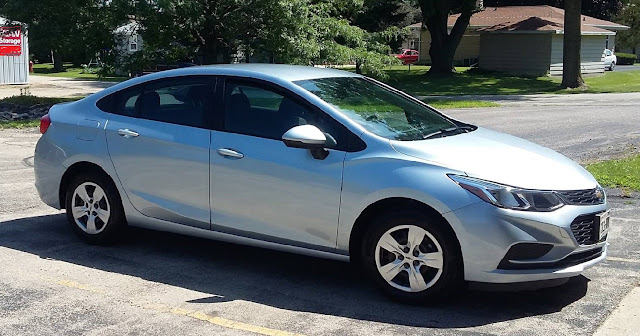 I've now had my 2017 Cruze for a couple weeks and have had an opportunity to drive it both in town (normal errands) as well as take it on a couple road trips with the family. As a result, I now have enough of a feel for the car to feel comfortable writing my first review of it.

Overall, I have to say I'm still happy with my decision to go with this automobile. I originally was looking for something a little bit bigger but, because of budget limitations, this was pretty much the only size sedan I could afford. However, as I've been driving it, I am discovering the car is exceeding my expectations.

One of the things that has really impressed me about this car is the way it has given us more space than what we had with my 2014 Cruze. The cars themselves really aren't any different in size. But, the newer version seems to have made better use of the space. My wife and daughters, for example, think it has more leg room than the other car did. This actually surprised me because, at first glance at least, that didn't appear to be the case. But, they all have long legs and none of them are complaining (as was the case with the 2014 model) so I'm going to take their word for it.

The 2017 Cruze also has more trunk space. This was actually one of my biggest priorities when car shopping because we make several trips each year to skating and dance competitions. This car has enough space in the trunk for skates, shoes, costumes, etc. as well as luggage (if needed). It's also spacious enough for our regular Costco runs.

Another thing I found I like about this car is the gas mileage. When I decided to go with this car, I honestly didn't think there would be much of a difference in that category because, again, it was roughly the same size as the car I had before. However, I'm currently averaging around 32 miles per gallon with this car (most of which is city driving). In comparison, the older model, on its best day, only averaged about 25. Gas isn't overly expensive at the moment but I still appreciate not having to fill the tank as much.

I would say the engine power and car handling are about average for this type of car. The engine is strong enough to get the car to 65 mph relatively quickly (I've never actually timed it, but I don't feel like I'm holding up traffic) and, unlike some other cars I've driven, I don't feel like I'm fighting to keep it on the road.

I'm still a little undecided about the parking camera that came with my car, mostly because I don't get an opportunity to use it all that much. The few times I did use it, however (mostly backing out of a parking stall in a packed parking lot), I did think it was a nice convenience.

Another thing I'm still trying to get used to is the auto stop feature, which shuts off the engine when I'm at a stop sign/light to save on gas. I understand the feature and why it's there. But, it still makes me think the car stalled out every time it kicked in.

As far as dislikes go, this model still has one pet peeve I had with my other Chevy Cruze. The car has traction control, which is awesome. But, the off switch for that feature is, once again, in the middle console by the gear shift, making it very easy to bump it and turn it off unintentionally. Chevy really needs to move that button to somewhere on the dashboard since there are very few reasons for wanting to have that feature turned off. 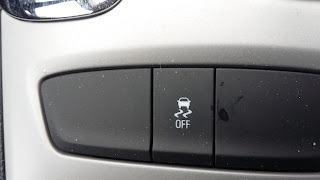 To be fair, however, Chevy did move the OnStar buttons. Before, they were on the rearview mirror and I lost count of the number of times I accidentally pressed one when adjusting the mirror. Now, they are located above the mirror. The buttons are still easy to reach with much less of a chance of accidentally pressing one.

It might just be my imagination, but the cup holders seem to be smaller. They are OK for a can of soda or regular-sized cup. But, if you like to get a large drink, there's no guarantee it will fit, especially since they are right next to the gear shift. There has got to be a better place to put those. And, as was the case with the older model, the driver is still the only one with full control over all the windows in the car. I would love to see them move this function to the front passenger side as well since, when I'm driving, the less thing I really want to do is be distracted by messing with the kids' windows in the back. That would be a better job for my wife or whoever else is riding shotgun.

I'm sure, as I drive the car more, I'll discover some more pet peeves (and will write about them when I do). But, at least for the moments, my likes definitely outnumber the dislikes and, as I said before, I am happy with my purchase. If you are looking for a smaller-sized sedan that offers plenty of trunk space, reasonable leg room and great gas mileage, it's worth checking out.