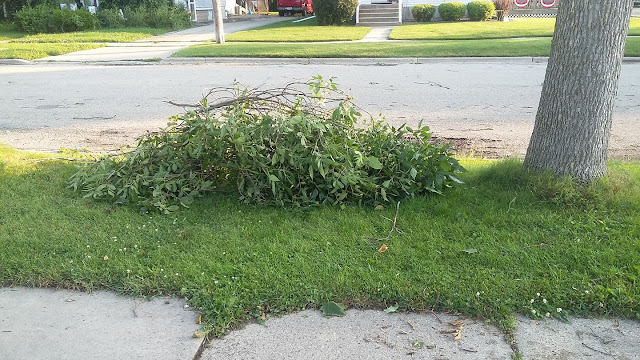 It went through about 10:30, starting first with the usual thunder and lightning but, eventually, that wind picked up to the point it sounded like all Hell was breaking loose outside.

The way our trees were swaying out front, I thought one (or both) were going to end up breaking in half and ended up watching out the windows out of fear of our cars or house getting damaged.

Fortunately, as it turns out, the worst damage we ended up having last night was a few branches on our sidewalk (a picture of the pile is above). It looks like some of my neighbors also lost some tree limbs but I don't see any damage to any of the houses/cars on the street. I'm not sure if that was the case everywhere, however, because I did hear plenty of sirens during and after the storm.
bad weather storm damage storms thunder storms thunderstorm weather
Location: Beaver Dam, WI 53916, USA