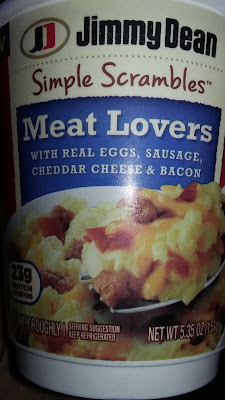 My wife came across this product in the refrigerator section of Wal-mart while doing some other shopping there. She thought it would be something I could make/eat while at the office and picked one up so I could try it.

I had some doubts about this product when I first saw it, mostly because I figured it would be like the frozen Jimmy Dean breakfast bowls I've purchased before (edible but not overly great). As it turns out, it exceeded my expectations by quite a bit.

I brought it to the office this morning and made it before starting my day. The instructions were very easy to follow. All I had to do was remove the lid, open the container containing the egg and the package with the potatoes meat then combine them. After that, the only thing left to do was microwave the contents (stirring on occasion) until they were cooked. Other than the fact it took about 30 seconds longer than the instructions said it would (it's a smaller microwave and, since the eggs were still runny, I had to cook them longer), I had no issues.

As far as taste goes, I was actually pretty impressed with this product. Since this was a refrigerated product rather than frozen and the eggs are cooked from a raw state, they tasted much fresher than the frozen bowl variety. Plus, even though it didn't look like there was much in the cup, it was surprisingly filling. 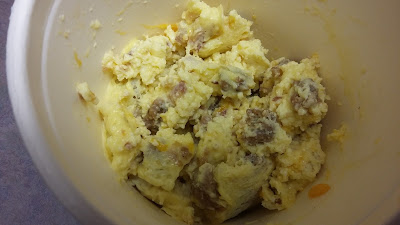 In other words, the product was well worth the money my wife spent on it. I would definitely buy this again and do recommend it.