Pulled the Trigger on a New Car 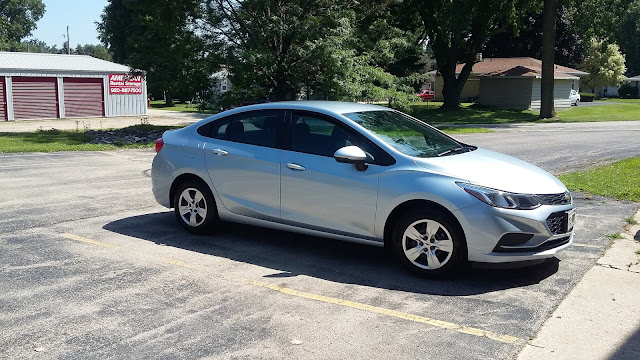 There is still some debate as to what color it is. The dealer says blue, my wife says purple and I think it looks silver. I think it really depends on the lighting and angle, which is cool because it means paint is somewhat unique.

I ended up going with the 2017 Chevy Cruz because it was the one that fit my budget best. Leg room wise, it seems to have a little more than the 2014 version, though that may just be my imagination (if it does, it isn't much more leg room). But, it definitely has a bigger trunk (a must for the girls' skating/dance competitions and Costco runs) and is supposed to get better gas mileage.

I have to wait a day or so for the satellite radio to activate on it, which is a bit of a nuisance (we don't have many traditional radio stations to choose from), especially since CD players are apparently no longer standard. And, I'm sure my daughters won't like the fact there isn't a built-in cup holder in the back seat (I think I still have one I can put back there for them) but, overall, I think it'll work out for me.
2017 automobiles cars chevy chevy cruz