June 16, 2017
My wife and I didn't have anything planned for dinner last night so, after a quick discussion (via text), we decided to just make spaghetti for the four of us. I had most of the stuff I needed already but we were out of pasta sauce so I ended up stopping at the store after work.

Since money is a little tight at the moment until payday, I had planned on just buying the cheapest brand and attempt to doctor it up a bit. However, when I got to the store, I discovered the Prego sauces were on sale and, even though they were a little more expensive than the cheapest option, decided to try their three cheese Italian sauce instead. 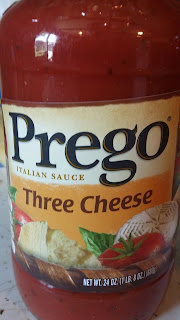 I picked this flavor because, being from Wisconsin, I love my cheese. And, after trying the product, I have to say I was happy with it.

I've had other sauces that promised a cheese flavor. Very few of them really delivered. I'm sure they all had cheese in them. I just could not taste it in them. That was definitely not the case with this product.

As is usually the case with this brand, I was also happy with the thickness of the sauce. Maybe it's just my imagination, but I always seem fuller after eating pasta with a thicker sauce than I do using a pasta sauce that is very watery. Our spaghetti dinner was a big hit and I can honestly say this sauce was a big reason for that.