June 14, 2017
My parents discovered they had an overabundance of hamburger in their freezer and, rather than have it go to waste, gave us a bunch of it. As a result of that, and because it had been a while since we had them, I decided to make tacos last night.

My original plan was to pick up an all-in-one taco kit at the grocery store. However, my wife likes hard shells and I like soft shells. And, since I couldn't find a kit that included both, I ultimately ended up buying everything separately, including the sauce mix 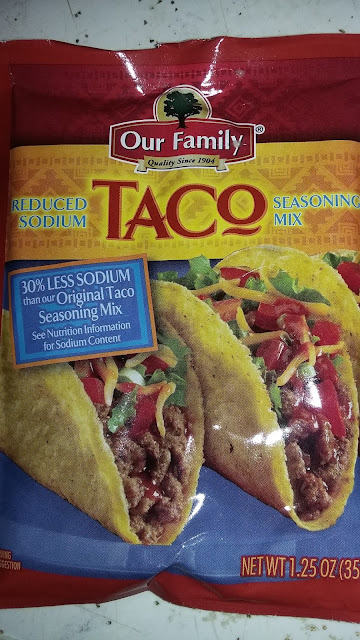 I purchased the Our Family brand of taco seasoning mostly because of the price. It was just 99 cents for the seasoning and, because of that, it made my overall purchase less expensive than it would have been had I purchased a full kit and added a second package of shells. After trying it last night, I have to say I was much more impressed with it than I was expecting to be.

The directions on the sauce mix were easy to follow. It basically consisted of adding the packet contents to already-cooked hamburger and some water. Once it was heated, the taco meat was done. As someone who absolutely hates following a lot of complex directions (just ask my wife), I did appreciate this.

As far as taste goes, I had no complaints. Since I had not tried this particular brand before, I wasn't really sure what to expect from it. But, the seasoning gave the taco meat a decent flavor that was definitely noticeable without being too spicy or too salty (I was more concerned about the latter than the former).

In fact, my only real complaint was there was only enough taco meat leftover for (maybe) one taco. But, even that isn't something I can blame on the sauce mix itself. Next time, I'll just need to use more hamburger.