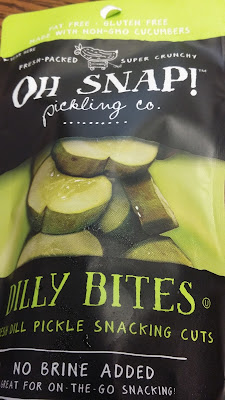 I wasn't originally planning on going for my walk at lunch today. However, the weather was nice and, since I figured it wouldn't last too long, I decided to squeeze it in at the last second. As a result of this, I didn't have anything with me for lunch so, after walking, I ended up stopping off at our local Kwik Trip convenience store for a burger.

While I was there, I noticed this item on the shelf in their refrigerator section and was admittedly intrigued. I like pickles but very rarely have them as a snack. So, since this was only 99 cents and I figured, if nothing else, I could use some of them on my burger, I decided to give them a try. Overall, I have to say I was happy with my purchase.

One thing I found I liked about this product when I was eating them at my desk was the fact they weren't packed in brine. This made them much less messy than pickles might otherwise be and, had my hand been small enough to fit in the bag, the pickle slices would have been just fine as a finger food (I ended up using a fork just so I could reach them).

As far as taste goes, I thought they were an OK product. I can't say, with any honesty, they were the best pickles I've had. But, they were decent enough. They had a definite dill taste to them but, unlike many lower-priced pickles I've had, didn't have too much vinegar. As a result of this, they worked well as a topping for my burger and as a snack.

In fact, given the lower price, I could definitely see myself buying this product the next time I want something different to snack on.