June 22, 2017
When I decided to make my skillet lasagna last night, I realized I needed to run by the store to pick up some of the ingredients. This included pasta sauce.

I originally planned on spending a little extra on a brand of pasta sauce I was familiar with. However, when I got to the store, I saw they had the Food Club brand on sale for just 99 cents and, realizing I probably would need two jars, I decided to pick up that brand instead. As it turns out, I probably should have just stuck with my original plan. 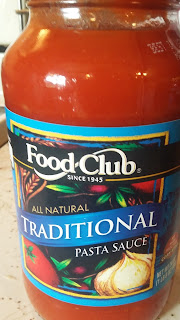 To be fair, there were some things I did like about this sauce. One of the main ones was the thickness. This wasn't the thickest sauce I've ever purchased. But, given the lower price (especially since it was on sale), it was thick enough. And, at least when it came to that aspect, it worked just fine for what I needed it for.

My problem with this sauce was the taste. It's really hard to describe but there was something that just seemed a little "off" about it. I don't think it was anything serious (such as the sauce being spoiled). But, I found I just wasn't overly impressed by the blend of seasonings they used in it and it just wasn't as good as the brands we would normally buy as a result.

Fortunately, despite this, I was able to make the lasagna enjoyable by adding plenty of cheese to cover up that weird taste. However, I'm now glad I resisted the urge to take advantage of the sale and stock up on this sauce.