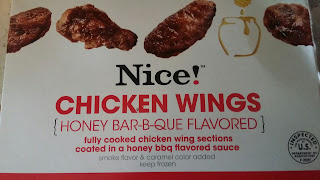 My wife and I decided to make pizza for dinner this past weekend and, since we wanted something to go with it, we decided on wings. I purchased this particular brand of wings because Walgreen’s was the closest store and it was the brand they carried. Plus, I remembered having this product in the past and, at least as far as I could remember, we liked it the last time we had it.

Unfortunately, after trying these again, I have to say I was very disappointed by the purchase.

As far as price goes, I thought (at least at first), I was getting a reasonable deal. The box of wings was less than $3, which is pretty good when compared to what we’ve spent on wings from other brands.

I also will say I liked the convenience of these wings when compared to some other brands. We’ve purchased a lot of other brands that required us to cook the wings and sauce separately then combine them. While, admittedly, it isn’t a huge amount of extra work, it is an extra step that I just am not a fan of because, if I wanted to do that, I would just buy the wings and sauce separately too.

One of the things I noticed right away about this brand I didn’t like was the quantity inside the box. There were just six wings, which is a much smaller amount than other boxes of frozen wings we’ve purchased. And, I’m assuming that might be the reason why this brand was so affordable.

I probably could have overlooked the quantity of the wings if the quality lived up to expectations. This, however, proved not to be the case. At first glance, it looked like the wings had a lot of meat on them. But, as we began to eat them, we realized they were really fatty and just not that good as a result.

To be fair, I did like the sauce that covered the wings. I thought it had a good blend of seasonings in it that gave the wings a little bit of a kick without being too spicy. Unfortunately, the sauce only went so far and, because the overall quality of the chicken was, at best, lacking, I managed to be disappointed with the whole product.
My Grade: C