March 03, 2020
Synopsis: Max absolutely adores Kate's new son, Liam and would do anything to protect him. But, when his overprotective nature results in anxiety, he must find a way to overcome it while visiting a farm. Meanwhile, Snowball attempts to rescue a baby tiger from a circus and Gidget pretends to be a cat in an effort to retrieve a lost toy.

Who's in it? The animated movie uses voices from Patton Oswalt, Kevin Hart, Harrison Ford, Eric Stonestreet and Jenny Slate.


Review: After a hectic few weeks, we finally had time to have a family movie night this past weekend and, since we all enjoyed the first film, this was my pick. Unfortunately, while I fully expected this movie to not be as good as the original, I wasn't expecting it to worse to a point none of us enjoyed it very much.

There were quite a few things I didn't like about this movie. The first was the fact there was just too much going on at once. It felt as though the writers originally intended this to be a TV series, decided to make a movie instead and just combined the plots from three separate episodes.

Individually, the stories weren't too bad, though I do think the part about Max (Oswalt) being on the farm was ripped off from the movie City Slickers, especially since Rooster (Ford) reminded me way too much of Jack Palance's Curly. But, because they were crammed together, the most interesting story, involving Snowball (Hart) trying to rescue that baby tiger, wound up seeming a little too rushed. At minimum, the farm plot should have been cut out so the movie could focus on the tiger rescue with Gidget's (Slate) cat impersonation as filler.

The other thing I found I didn't enjoy was the movie's PG material, which was actually kind of intense for a kid's film. The animal cruelty that was on display in the film was surprisingly disturbing and was even making my 15-year-old daughter uncomfortable. This, in itself, probably wasn't necessarily a bad thing. But, the movie's animal cruelty message was a bit mixed with the equally-abused wolves being treated as the bad guys and an animal hoarding situation being treated as comedy fodder.

And, maybe this is just the prude in me sneaking out, but was it really necessary to have one of the characters describe himself as being "pissed" in a family film? Sure, it wasn't anything my kids haven't heard before. But, it just seemed like this movie didn't need it and, between that and some pretty violent scenes, I probably would have been pissed off myself if my kids were younger.

Final Opinion: Considering we really enjoyed the first movie, this film was a pretty big disappointment for us. And, the worst part is I'm not sure if it was because the writers were trying too hard or not hard enough. 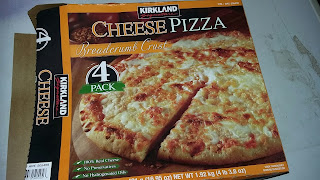 My wife and I did our routine Costco shopping trip a couple weeks ago and, while there, ended up in the frozen food section. As we were walking by the frozen pizzas, we noticed this particular brand and, more importantly the price (a pack of four pizzas for $9.99). Since we tend to eat a lot of frozen pizza in our house (for the convenience) and cheese is our daughters' favorite, we decided to make the purchase.

We made one of these for our daughters not too long after we made the purchase. However, they didn't really comment about the pizza either way and, because of that, we didn't know how good they were. However, a couple nights ago, we were in the mood for an easy dinner-for-two (our daughters had already eaten a little earlier) and, mostly because we didn't want to run to the store, ended up making one of these on our pizza oven. As it turns out, they are actually really good.


One of the things I found I liked about this pizza right of the bat was the crust. A lo…
Read more